So You Want to Get Into Anime: An Introductory Guide 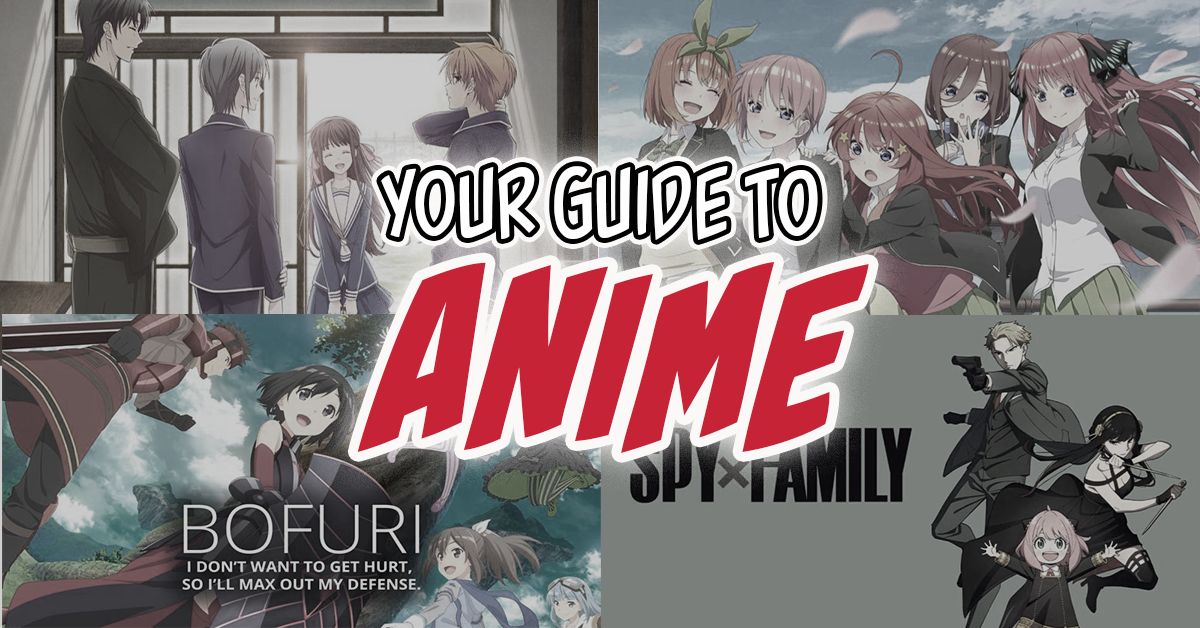 It’s anime convention season, and so naturally, you want to get into anime. But there’s just one thing stopping you: Where do you start? Anime is an incredible medium of story-telling that showcases a variety of animation styles, along with several genres and subgenres with thousands of titles under each one. Naturally, it can be very intimidating, especially if you’re trying to find the perfect introduction to get you immersed. That’s where this guide comes in! In this guide, we’ll explore a couple of common genres you’ll see in the world of anime, along with some easy-to-watch titles to get you hooked. Without further ado, let’s watch some anime!

Two of the most common genres of anime are Shonen (pronounced show-nehn) and Shojo (pronounced show-joe). Shonen is a genre aimed typically toward “male” audiences while Shojo is the opposite, catering primarily to “female” audiences, But if we’re being honest, anyone can watch anime under either genre as they all have something to offer, regardless of the intended audience. Here are some recommended titles.

Many of us remember the classic Sailor Moon anime that graced our tv screens in the 90s. With our titular character, Sailor Moon a.k.a. Usagi Tsukino, the anime made waves and taught young girls everywhere that we have value whether we’re strong, feminine, or the polar opposite. But did you know that a remake of the name Sailor Moon Crystal was released in 2014? This remake featured more modern animation across 3 seasons as well as a 2-part movie. Because it strictly follows the plot of the manga without any fillers, it makes for an easy binge until you feel ready to conquer the 200-episode version along with 3 additional movies.

Naruto and Naruto Shippuden, part of the original “Big 3” from the ’90s and early 2000s,  is an excellent shonen anime that holds up even today and continues to increase its fanbase. We are introduced to an expansive world filled with ninjas as it discusses hard-hitting themes like the impact of war as well as grief and trauma. But it also teaches the idea of proving your resolve and persevering no matter the obstacle, as well as discussing found families. With catchy opening and ending themes, loveable characters, and comedy sprinkled all throughout, it’s no wonder it’s beloved by many. If you feel confident enough to brave the 700+ episodes that await you, I can guarantee you won’t regret it.

Another popular Shojo manga, Fruits Basket was adapted as an anime a second time in 2019 with brand new animation, and streamlined storytelling. If you’re not familiar with the story, it follows Tohru Honda, a kind-spirited teenage girl who ends up in the care of the Sohmas, a family that is not all that it seems in this supernatural romance anime. This anime showcases not just romantic love but also familial and platonic love and succeeds in throwing you into an emotional rollercoaster. As slow as it may seem at first, I recommend sticking it through to the end because the ending is truly worth it.

One of the most popular current running anime, My Hero Academia fuses all things Marvel and DC with classic Shonen styles. We follow Izuku Midoriya as he navigates a world where people are gifted with powers known as “quirks”, but he has none. At least not until All Might, the #1 hero in Japan, takes notice and names Midoriya as his successor. If superheroes are what you’re craving, then this action-packed anime will satisfy you. Superheroes, action, a wide range of characters and abilities, and new and intriguing villains. It’s hard to not find someone to root for, whether it’s our boy Midoriya or the most unlikely hero.

Isekai (pronounced Ih-sih-kai), a word that translates to “different world” or “otherworld”, is also an extremely popular genre that has blown up over the last couple of years. If you’re also a gamer, then you are probably familiar with trivial and redundant tasks or big bosses that take several attempts to beat. Isekai lets you relive all of that but in anime form. The most common anime in this genre is Sword Art Online but let’s explore some other title recommendations instead.

Bofuri: I Don’t Want to Get Hurt, So I’ll Max Out My Defense

Don’t let the incredibly long title scare you! Bofuri is a perfect example of isekai, where we follow our main character, Kaede who begins playing a new VRMMORPG called New World, where she creates the identity of Maple. In order to avoid damage in game at all costs, she chooses to focus on building her defense stats, leading her to be an unusually strong character. Not only are our main characters insanely adorable and fun to watch, but it just makes you want to jump into a video game yourself. Bofuri tends to come off more like a mix of an action isekai and slice of life, which makes for such a strange yet entertaining watch. With only 12 episodes to go through, you don’t have to be concerned with excessive fillers (unless that’s your thing), and you’ll find yourself wishing for more.

Similar to Bofuri, Kuma Kuma Kuma Bear is a simplistic isekai anime that follows Yuna, our main character, who is a longtime player of World Fantasy Online, a first-person view game. After being gifted an odd bear suit, she and her abilities are immediately bound to it, and she must proceed to complete missions and quests in said bear suit. Following the same 12-episode format, you still get the ability to connect with some of the side characters, and if you have a fondness for anything that is cute, then this anime will satisfy you. It’s isekai-style anime that doesn’t take itself too seriously but acts as a basic introduction to get you familiar with the genre so as not to overwhelm you. If anything, it’ll keep you entertained and giggling till the end.

One of the most popular slice of life and comedy anime in recent years, Himouto Umaru-Chan follows 16-year-old Umaru, a seemingly perfect and popular girl in high school. But as soon as she gets home, she transforms into the cutest snack-obsessed gamer gremlin you’ll come across. With only 2 seasons, Umaru-Chan will own your heart and be that goofy sweet character you can relate to on so many levels. From beach episodes to gaming tournaments to chippies and cola, this anime has it all, and it’s one I recommend to anyone wanting to dive into the world of anime.

If you have a love of music, K-On might be the one for you! In a world where artsy anime is now common, this one, in particular, kick-started the genre of music anime. In two seasons, we follow a group of high school girls who form the Light Music Club and write the most catchy songs you’ll hear throughout the episodes. It follows the formula of slice of life as well as comedy, with numerous hilarious characters with their own identifiable personalities and characteristics. If you’re looking for a quick anime to binge, K-On is perfect and may even get you to want to start an anime music playlist!

You’ve probably heard of Ouran High School Host Club, an anime that seamlessly blends slice of life, comedy, and romance. It follows the bizarre trials of Haruhi Fujioka, a young teenage androgynous girl who ends up having to pay off a debt by joining her prestigious high school’s host club. With each member of the host club developing a unique relationship with our lead heroine, she makes an impact on each of them, changing the course of their high school careers. It is hailed as a beloved anime from the mid-2000s that never seems to get old, and is perfect when you want to feel all the romance but still be knee-deep in laughter over cringe tropes. And yes, it indulges in every possible trope imaginable making it the perfect intro within this genre of anime.

As stated before, anime has a vast and endless amount of genres and subgenres for you to dive into as you become more accustomed to anime.

For example, Spy X Family, an ongoing anime that has everyone talking, is an action-comedy that leads its audience into a serious moment only to take a 180 turn and have you laughing unexpectedly. For sports fans, SK8 the Infinity is a colorful and upbeat anime that dives into the world of skateboarding but will encourage you to find your own style and remind us all to enjoy what we love no matter what.

But then again, maybe you’d prefer a classic space western noir like Cowboy Bebop, which leaves breadcrumb trails for us to theorize until the bitter end but will give you enough heartfelt and hilarious moments to make you love each character. And as always, for the romantics at heart, you have titles like The Quintessential Quintuplets and Kaguya-Sama: Love Is War, both of which have a different take on romance but will have you rooting for the characters every step of the way.

Whatever your style may be, check these titles and genres out, and see which one you like best. Perhaps you might end up liking them all!