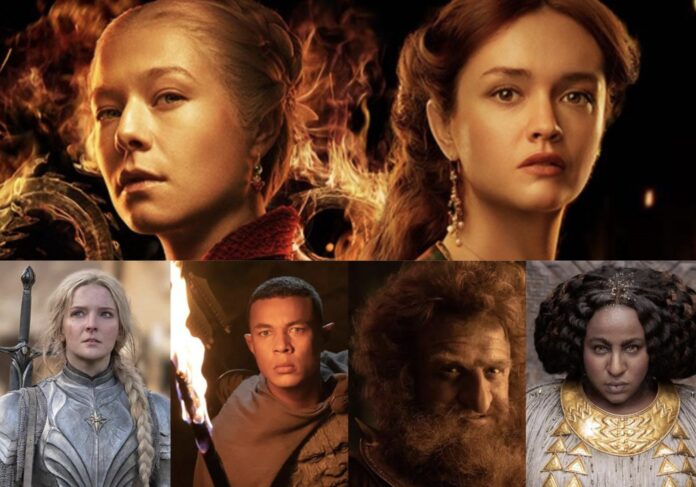 If I had a nickel for every fantasy show that was intended to be a prequel of an existing franchise and aired in the fall, I’d have two nickels.

It’s not a lot but it’s weird that it happened twice, right? And that’s exactly what happened with PrimeVideo’s Rings of Power and HBO’s House of the Dragon.

Read More: For The Love of Middle Earth! My Lord of the Rings Story

Is There Really Room For A Comparison?

Since the premiere of both shows, many people have debated and argued over which is the better, more superior show. Several viewers clamored on about the Rings of Power tarnishing and changing the original lore from J.R.R. Tolkien, the author of The Lord of the Rings amongst other related books. Other fans slammed House of the Dragon for being too boring and projected it to be a failure after the final two season of Game of Thrones proved to be a great disappointment to fans.

To no one’s surprise, extreme prejudice was also a major issue for each show as both shows featured characters played by Black and Brown actors and actresses. And yet, Rings of Power and House of the Dragon broke out with high ratings and praise from critics and fans alike, deservingly so.

If I’m being honest, at this point, the competition and comparisons between both shows are absolutely absurd and make no sense. There is no competition and there is no way to compare the two because of how very different they are from one another. And you may be wondering, they’re both under the fantasy umbrella, so how different can they really be?

The Rings of Power and What It Stands For

Rings of Power serves as a prequel to the events of The Hobbit and The Lord of Rings, taking place before the One Ring was even created. Because the Tolkien estate  has refused to allow the rights to a majority of Tolkien’s works be given to any studio, a lot of creative liberties were taken with the show’s stories, characters, and overall lore.

We still get to see familiar locations as well as characters we know and love like Galadriel and Elrond. But we’re also introduced to new characters like Disa, Arondir, and Nori and the other harfoots, all of whom are entertaining to watch and characters we’ve grown to love over the first season.

The show has proven itself to be capable of creating brand new stories while expanding on the world we already know but in a different era. And it stays true to one idea: The Lord of the Rings has always been about good versus evil, light defeating darkness. Even though darkness and shadow can seem big and intimidating, there is still light in the world that can defeat it, even for those who do not truly know their place in the world.

Yes, Rings of Power can be political and strategic at times. But at its core, it continues to follow the idea of different races banding together to fight a common enemy. And this is exactly what sets it apart from House of the Dragon, the prequel series to the critically acclaimed show, Game of Thrones.

House of The Dragon and Its Harsher Message

House of the Dragon is based on George R.R. Martin’s book, Fire and Blood, taking place 200 years prior to the events of Game of Thrones. The messaging of the show so far is drastically different from Rings of Power in that allegiances change almost every episode, and there is no such thing are someone who is purely evil or purely good. Oftentimes, characters are somewhere in between or don’t know where they stand.

While Rings of Power believes in a united front and using kindness and goodwill to benefit one another, House of the Dragon explores the fickle nature of society from top to bottom. There is no one who is guaranteed to be on one person’s side or have their back in times of need. The show’s first season is also extremely political and has us navigating through tunnels of lies, greed, grief, trauma, lust, and above all, the continued fight for the iron throne.

The Beauty of Fantasy

Rather than comparing both shows, I think it’s safe to say they’re on completely opposite ends of the spectrum when it comes to the fantasy genre. They both explore conflicting ideas of their own worlds which are no doubt polar opposites of one another, and neither of these shows’ messages are wrong.

The world can be cruel and painful to navigate. But there is light to counteract the shadow that lingers over us. At times, we do have to act alone to get what we need, but other times, it’s important to learn to trust one another and work together to achieve a common goal.

Whether you watch one or you watch both is up to you. But in the end, there’s just no comparing The Rings of Power and House of the Dragon. We can have so many stories with conflicting messages and vastly different character types, all of which can coexist in the same genre. And that is the beauty of fantasy.