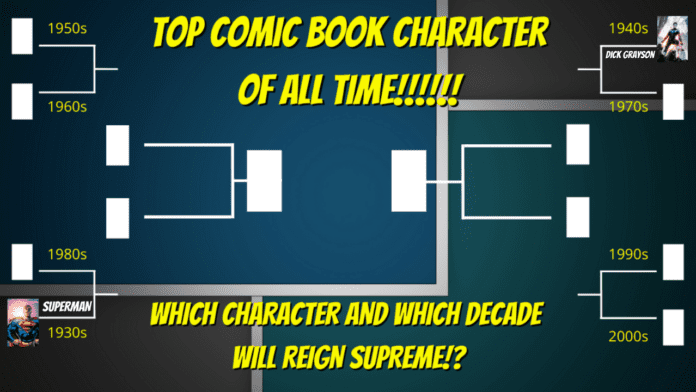 For 38 weeks in a row now I have been running a tournament of sorts on my TikTok account. The goal of this tournament is simple, to settle the debate on who is the greatest comic book character of all time. Based on popular vote, rather than who would win in a fight. Here is the breakdown.

The tournament spans over 8 decades worth of comic book characters from the 1930s to the 2000s. The tournament is broken down by decade, with the top 16 characters who debuted that decade starting off the bracket.

128 characters in total, 16 per decade, 8 decades. The winning character of each bracket moves on to a final tournament to decide the all time greatest.

Check out the past tournament videos here

So far there have been 2 decades completed in the tournament. The 1930s came down to a battle between two titans of comics, Batman vs. Superman. Superman came out on top in the end and the caped crusader was sent home packing.

Next came the 1940s, and that had some upset rounds. Such as Wonder Woman being defeated by Doctor Fate, or Catwoman losing out to Plastic Man. The finals came down to Dick Grayson vs. Plastic Man, and the original Robin took home the win.

This week marks the last preliminary round of the 1950s bracket. Which is being duked out by Barry Allen, aka The Flash and the Fighting American.

How Can You Vote?

Check out the video above, and either leave a comment on the video with your vote, or you can vote using the poll sticker embedded into the video itself.

YOU could have a direct say in who earns the title, of Greatest Comic Book Character of All Time!