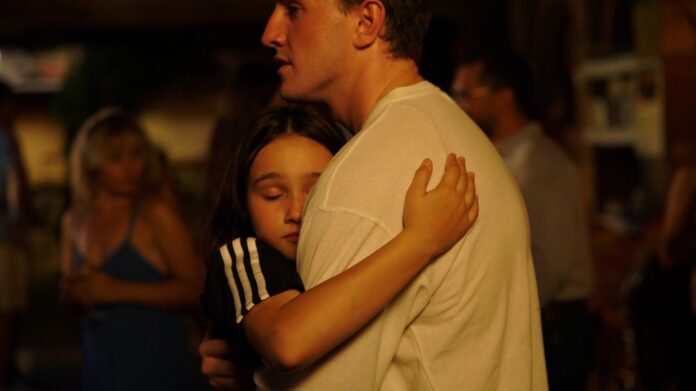 As I attempt to watch as many movies that I can that are possible contenders for the Oscars race, I rushed to watch A24’s Aftersun. This coming of age film centers around a 30-year- old father, Calum, who goes on a trip to Turkey with his 11- year-old daughter, Sophie. While it’s clear from the start that they have a close relationship, the distance between them and Calum’s personal struggles begin to unravel. What is marked as a fun holiday soon becomes a message about change and growth.

I went into this movie knowing nothing other than the fact that it is about the relationship between a father and his daughter, a subject that has always been a bit touchy for me. Most of the movie just seems to feel very basic in plot, and on the surface level, it’s just a fun summer vacation with some bizarre moments. But as you watch the film, there are flashes of moments of what appears to be an older Sophie trying to find and reach out to her father. It’s never quite clear what these moments signify until the very end.

Much of the story’s thematic elements center around the relationships we have with our parents, and the parts of them they try their best to keep secret from us. But oftentimes, these secrets become a driving force in the distance we feel with them as we grow older and begin to realize they’re not always who we thought they were. At the same time, as children and as teenagers, we don’t realize that we’re also beginning to change and we’re not who our parents thought we’d be.

I appreciate the underlying theme of the film and I respect the direction it takes to tell its story. It doesn’t want to hold your hand and only gives you glimpses of the reality of the relationship between our two main characters. Again, the story itself is extremely quiet and simplistic unless you’re actively looking for the meaning within it. But at times, I felt myself fading in and out of the movie, and I didn’t really feel anything pulling me in completely until the last half hour. In the end, I was shocked to find that the film didn’t affect me as much as I thought it would. The performances were subtle and carried most of the movie but otherwise, I didn’t feel that the film was anything spectacular or groundbreaking.

But I think that says more about myself than it does about the movie. I have my own experience with it that will differ greatly from the next person. Ultimately, I think it boils down to the things you’ve come to terms with, and what you’ve faced head-on and accepted in your life, especially when it comes to relationships with any of your parents. For me, the movie didn’t impact me the way I thought it would but it made me realize how much work I’ve done to accept what is and what I’ll never get the chance to do. For someone else, it could be an eye-opener or a motivator, or it could be something another person can’t relate to.

I can’t see myself watching Aftersun again, not because it was necessarily bad, but because it wasn’t really made for me. I don’t think it’s really a movie that I personally enjoyed simply because of the journey and self-reflections. But there are aspects of the film I was able to relate to, and I was able to appreciate what it set out to do as well as the message it wanted to relay to the audience, one that I know many may need to hear. Aftersun is a piece of art that can be watched by anyone, and have a different impact from person to person, but only if you can keep an open mind.

Aftersun receives 3.5 out of 5 Samosas.

Everything You Need to Know About … Kang The Conqueror

When Covering Celebrity Deaths or Injuries, Do We Sensationalize Things?