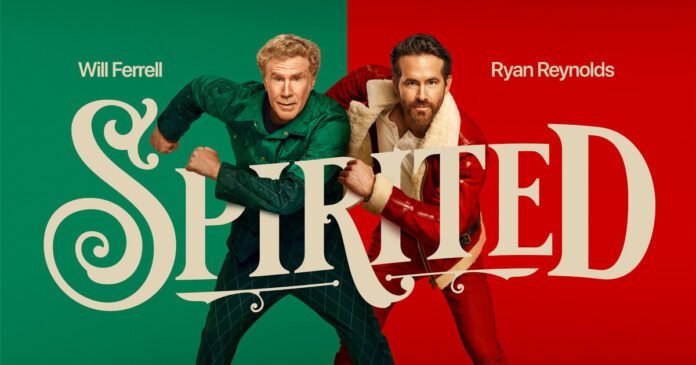 The story of A Christmas Carol is widely known by many, and there is an abundance of adaptations of this classic tale. A dark and foreboding message echoes each time we see a version of Ebenezer Scrooge as he is approached by the Ghosts of Christmas, pushing him to change for the better. Apple TV+’s new film, Spirited, changes the formula entirely.

Spirited stars Ryan Reynolds and Will Ferrell alongside Sunita Mani, Tracy Morgan, and Octavia Spencer, and follows the Ghost of Christmas Present (Ferrell) as he attempts to change the ways of Clint Briggs (Reynolds), a vile media consultant. I won’t give anymore of the movie away as it’s something that one needs to just watch for themselves to fully comprehend what has been altered from the original story.

Read Also: Disenchanted: Is The Magic Still There And Does It Hold Up?

Does This Adaption Work?

Getting the cons out the way, I think the movie could have been slimmed down by a half hour, give or take.  There are some aspects of the film that serve little to no purpose, and causes it to feel dragged out at times. And while the movie manages to follow two story arcs at the same time, it can feel a bit cluttered and overstuffed at times which can be overwhelming. And frankly, the overabundance of songs also seems to be common with this season’s new movie releases and applies especially to Spirited.

However, while there are so many interpretations and versions of A Christmas Carol, I think Spirited manages to pull off a unique take on the story. It pushes you in one direction and right as you think you understand the story, the movie pulls you back and pushes you in a new direction. And it does live up to its musical nature. A lot of the music is fantastic and comedic, with insanely choreographed dancing that just feels right for this movie. Who knew Reynolds and Ferrell could be so in sync with each other?

One thing I will say is that sometimes having too many funny people in one movie can lead to everyone competing and trying to outdo the other comedian. Thankfully, that does not happen here. Reynolds and Ferrell work well together as their humor bounces off one another and plays into a couple of the long-running gags that we see throughout the movie. Meanwhile, the supporting cast is utilized appropriately to give balance to the characters’ individual story arcs.

Whatever your predictions or expectations may be about this movie, you’re probably right about them but not exactly in the way you think. It’s just as fun as its trailer lets on, if not more so, and deserves a chance this season. Spirited isn’t perfect and could do with a song or two less but it’s a worthwhile watch in the end, especially as we begin to head deep into the holiday season. It’s not your average Christmas Carol but it is festive and joyous, and perfect for the whole family.

Spirited is now playing in theaters.