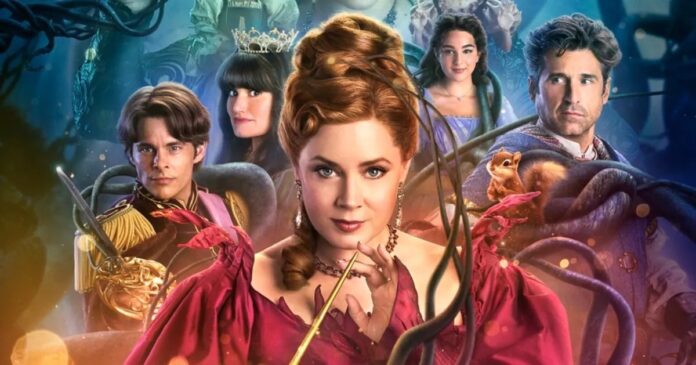 15 years ago, Amy Adams and Patrick Dempsey stole our hearts with Disney’s modern fairy tale, Enchanted. After all, who could ever forget the romance between Giselle and Robert which was filled with so much magic and hard-hitting reality checks? It’s no wonder that fans were filled with excitement when Disney announced that a sequel, Disenchanted, would hit Disney+ this holiday season.

What’s It All About?

Disenchanted is all about what happens after “happily ever after” for Giselle and Robert as we also see a teenage Morgan and a new baby in the mix of it all. As the fairy tale family makes a move to a new town, everything changes and becomes off-balance, and happily ever after doesn’t seem to feel so happy anymore.

While Enchanted carried a much more positive beat despite the startling reality that life isn’t all about fairy tales and happily ever after, Disenchanted takes on a much different tone. There’s still a sense of magic and wonder within the film that draws our curiosity as one thing leads to another. But it’s not the same kind of magic that lifted our spirits in the first go-around with this amazing set of characters. I can accept that this may have been the intent of the movie but it’s strange that Disenchanted left me feeling a little unsatisfied and with a bleaker outlook on things.

Magic of the Characters!

Amy Adams shines as Giselle, and I love her ability to morph into whatever she needs to be at any given moment. It’s a wonder she hasn’t won an Oscar yet! Patrick Dempsey simply exists in the movie and for what purpose, I really don’t know other than to be opposite Amy Adam. And I wouldn’t say Maya Rudolph is compelling or outstanding in her role but she does the best she can with what she’s given.

Meanwhile, Idina Menzel is given her moment to shine as she rightfully deserves and I absolutely love her solo song, “Love Power” which is frankly, the only memorable song in the movie. But perhaps the most under-utilized character is James Marsden’s Edward. For someone who provided so much comedy throughout the original and is simply comedic no matter what he’s in, I was hoping to see him shine alongside Menzel. Unfortunately, that wasn’t the case and it felt like he was cast aside entirely.

Don’t get me wrong, I adored every fantasy aspect of the film and make no mistake, there are plenty of references to Disney’s classic fairy tales. It’s gorgeous to watch to the point where you almost want to dive into the world they’ve created. And naturally, the message of the movie is clear as day and something we can all relate to. There’s a lot to love and appreciate from the movie overall.

But between the over abundance of songs where Disenchanted tends to drown out any possibility for catchy and memorable tunes, to the tragically underused characters, Disenchanted just falls flat in more areas than one. The magic is definitely there but it feels different, as if it was on a budget. I think if you’re a hardcore Enchanted fan, you may feel that the title of its sequel is accurate. But if you set aside the fact that it’s an entirely different story with a different purpose, you might find yourself enjoying it, to an extent. I’m not here to discourage anyone from seeing it but I will say to lower expectations and accept the movie as it is. That’s really all we can do with a Disney sequel.

Disenchanted is currently streaming on Disney+.