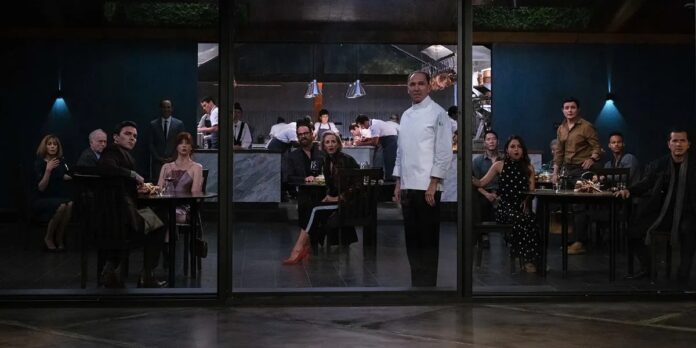 Searchlight’s new movie, The Menu, is literally all about eating the rich. Okay, I’m kidding about the literal part, but that is the most basic way of explaining the movie without giving too much away. To expand on it, though, a young woman embarks on a boat ride to a remote island to dine at one the finest restaurants in the world. But there’s so much more to it than that.

This is one my favorite movies of the year, and all because it simply caught me off guard. I had an expectation about this movie that was thrown out the window and into the ocean, and was replaced by something so much more bizarre that required double takes through multiple scenes. There’s perhaps one or two major points of the movie that are around solely for shock value before you realize, this movie does not take itself seriously and doesn’t want you to take it seriously either.

There is obviously a message about the food service industry as it coincides with the lives and attitudes of several rich people. Every character has their story but most of them are all prevented from being anything more than one-dimensional, shallow beings. That all comes with having a talented cast that works well as an ensemble despite how separated or disconnected they feel from one another. Anya-Taylor Joy and Ralph Fiennes are both spectacular and I thoroughly enjoyed the peculiar yet hilarious performance of Nicholas Hoult.

The Menu is a simple film. Nothing flashy or noisy in its aesthetic. It tells you what the point is from the get-go but makes you wait for the final payout up until the very end. Chances are, you’ll either find this movie absolutely foolish and a waste of a ticket, or you’ll love and appreciate it as much as I did. Frankly, there’s no correct reaction and you’ll probably be in shock for about the first half hour trying to piece together what you saw. But if you get the opportunity to watch The Menu, I cannot recommend it enough.

The Menu is now playing in theaters.