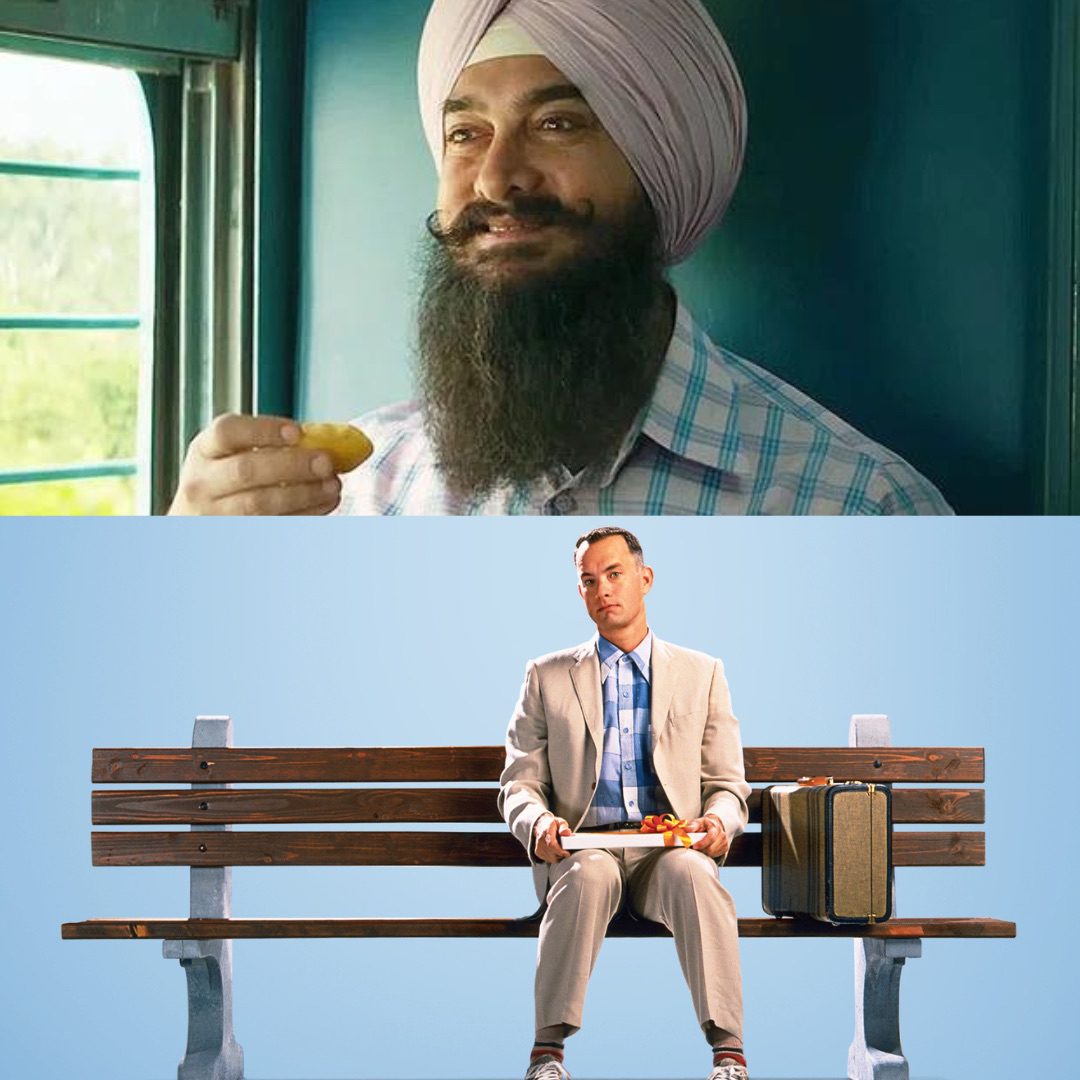 Forrest Gump is hailed as one of the most beloved films of the 1990’s with Tom Hanks portraying the titular character. Most are familiar with the famous line, “Life is like a box of chocolates.” And many love the contagious feelings of hope and positivity that Forrest spreads.

After nearly 30 years after the release of Forrest Gump, Bollywood studios Aamir Khan Productions and Viacom18 Studios decided to create their own take on the movie. Just recently on August 11, Laal Singh Chaddha starring Aamir Khan was finally released.

Read: Anime and Astrology: Let Fate Decide What to Watch Next!

There are some major similarities with minor differences to the original film but Laal Singh Chaddha succeeds in standing on its own to tell a vibrant tale. So, let’s dive into parallels between both films and what makes them both unique.

While both movies are identical in mind, I want to warn you that there may be a few minor spoilers ahead for Laal Singh Chaddha. Be sure to proceed with caution if you mind spoilers!

Forrest and Laal share so much in common, from the miracle of being able to run despite their disability to joining the military and saving the lives of their comrades. It’s no surprise that both have a tendency to have a positive effect on those around them whether they realize it or not.

Their good-hearted natures cause them to have a naïve outlook on life, it has always resulted on doing the right thing to help others who are in need. And whether it’s the affectionate relationship they share with their childhood best friends or the love they have for their caring mothers, Forrest and Laal are incredibly impacted by the women in their lives.

However, the major difference between the two is how much younger Laal is when history begins to impact his life. While Forrest’s biggest trial as a child is overcoming his disability and finding the strength to run, Laal is hidden from a frightening and violent world, and is ultimately forced to detach himself from his cultural identity.

As they grow older, Jenny doesn’t have much presence in Forrest’s life and only shows up occasionally. While Jenny seeks to be part of the anti-war movement, it’s clear that her unhealthy lifestyle has taken over her and affected the type of person she becomes. While running from her problems, she ends up less of a friend to Forrest and more so someone who pities him.

Rupa, on the other hand, remains a long-term friend to Laal as her presence greatly impacts him in positive ways. While Rupa is often miles away from him, she remains honest and upfront with Laal, while chasing her own dreams. She faces her problems head-on and consistently protects Laal from the consequences of her own risky actions.

A Delicious Lesson: Box of Chocolates and Golgappas

“My mama always said, life was like a box of chocolates. You never know what you’re gonna get.” One of the most famous quotes from Forrest Gump, it discusses the unpredictability of life and adapting to the circumstances you end up in.

Most of your life is outside your control and it’s up to each individual to make the best of it. With this mindset, it’s how Forrest manages to utilize his well-intentioned heart to help others, only to end up succeeding in the end as well.

“My mother used to say life was like golgappa*. Your tummy might be full but your heart never is.” A new and nuanced rendition of the original quote doesn’t quite touch upon how unexpected life can be but always having the ability to do and the capacity to love more. It’s as if to say you can accomplish all that you want in life and fulfill your list of dreams.

But it’s more important that what you do is out of the genuine goodness of your heart. Throughout the course of his life, Laal has been sheltered from the trauma of violence and conflict, and never thinks about what he can get in return for his actions. Instead, he remains innocent and genuine, and believes everyone is worth helping, no matter whose side they’re on.

While each quote has its own meaning, both utilize a popular and delicious treat to convey a strong message about life. It’s enough to always get you to question your purpose and path in life, while reminding you that things will happen whether you expect it or not.

*Golgappa: Also known as panipuri, it is a popular street food item consisting of bite sized puff balls, often filled with chickpeas, potatoes, onions, and spices, along with a tangy and spicy water.

It’s an odd part of the lives of Forrest and Laal but it seems they consistently cross paths with people and opportunities that they never expect to be larger than life later on.

For Forrest, he meets the well-known and beloved Elvis Presley, whom he happens to teach some signature dance moves. That iconic dance move is one of the ways we remember Elvis best.

On the other hand, Laal comes across the younger self of a very famous Bollywood actor that we’ve all come to love and respect. Though his disability limits his moves on a rooftop in Delhi, Laal opens his arms to the rhythm of the music, and the legendary Shah Rukh Khan* mimics and adapts this iconic move.

Everyone who’s seen Forrest Gump is familiar with Bubba Gump Shrimp Co, and maybe has even eaten there. The company and restaurant was founded in memory of Forrest’s late best friend and ally in the US Army, Bubba, whose love of shrimp inspired the name behind it all. With its surge in popularity thanks to the help of Lieutenant Dan, Forrest not only becomes financially stable but gives half of the profits to Bubba’s family.

Similarly, in Laal Singh Chaddha, the character of Bala, the counterpart to Bubba, has a long family history of designing and manufacturing undergarments. It’s an odd tradition compared to shrimp. But it makes sense when you realize the company is made in honor of Bala but renamed to Rupa Corporation, which is currently one of the largest undergarment companies in India. No, really, look it up! In this particular rendition, however, the man who helps Laal in ever-growing investments is Mohammad, an ex-enemy soldier whom Laal rescues during his time in the army.

Forrest and Laal Living Through History

The majority of the political climates and history events in Forrest Gump are pulled from the 60’s and 70’s, when monumental events like the Vietnam War and the Civil Rights Movement of the 1950’s and 1960’s were ongoing. Meanwhile, in Laal Singh Chaddha, it touches upon very sensitive moments in India’s history, from Operation Blue Star to the beginning of the Indian-Pakistani War. The presence of war and domestic conflict run deep within both stories, especially once both Forrest and Laal join the army and see upfront the horrors of war. While loss and trauma are inevitable for those around them, Forrest and Laal never lose their hopeful attitudes, and are both awarded for their terms of service and heroic actions.

One of the most bizarre, hopeful, and inspiring scenes from Forrest Gump is Forrest running across America until he reaches back home again. As his run becomes more noticeable with crowds of people joining him, Forrest never gives a clear answer on his reason for running. But one thing remains true: His impact on society and even pop culture stay positive as he spreads hope throughout the country.

Laal Singh Chaddha follows the same formula, with Laal instead running throughout the different states of India until he stops one day because he is “tired” and returns home. Hoards of people followed him for the same reason as Forrest: He gave them hope, whether they thought he was running for environmental reasons, for international conflict to end, or perhaps for his own personal reasons.

One more thing remains the same: Both runs occur after spending an evening with the love of their lives, only to find that they’ve left by morning.

In many ways, the remakes or renditions of movies we’ve seen don’t always meet our expectations and don’t capture the essence of the original. The same cannot be said for Laal Singh Chaddha as it gives the same energy that Forrest Gump does with its familiar tones and heartfelt messages. While both films share many similarities, on their own, they tell a story that is enough to inspire anyone.